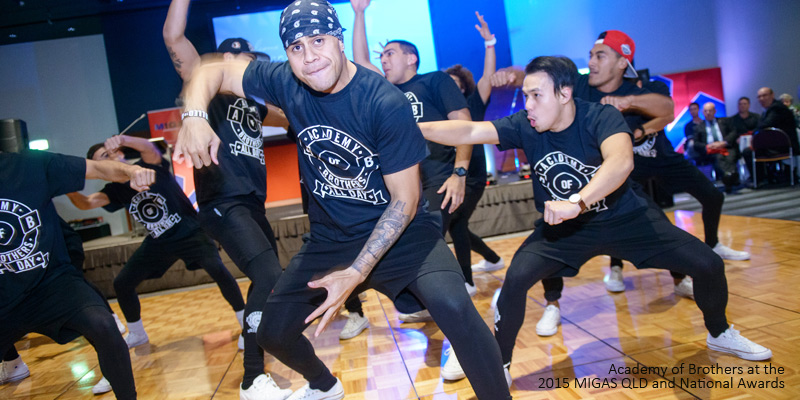 The QLD and National MIGAS Awards Night held on the 24th July 2015 played host to a number of exciting entertainment including guest speaker Steven Bradbury and the musical stylings of the Red Tie Band, and we also had the pleasure of welcoming Australia’s Got Talent grand finalists Academy of Brothers.

Academy of Brothers (AOB) have leveraged a national fan base from their appearance on Australia’s Got Talent, and have gone from strength to strength on the competitive dance circuit. Officially ranked #1 in Australia, AOB launched to an international audience within two years, positioning themselves amongst the Top 5 Best Dance Crews in the world. AOB are a power house mega crew, who operate on a global stage.

QLD MIGAS Business Development Manager, former Reds player and former AOB Director, Charlie Fetoai, was pleased to bring together MIGAS and Academy of Brothers as furtherance of our commitment to providing opportunities and guidance to Australia’s multicultural youth.

“My passion is providing youths with opportunities to learn, develop and succeed. It’s important to not only educate youths but to also empower them to be leaders of tomorrow. A great community initiative, I’m really proud to see how far the boys have come and how they just go from strength to strength," says Charlie.

For more information about the Academy of Brothers or to book them for your own event please contact AOB Director Pyan Ng on 0422 205 566 or email academyofbrothers@gmail.com.