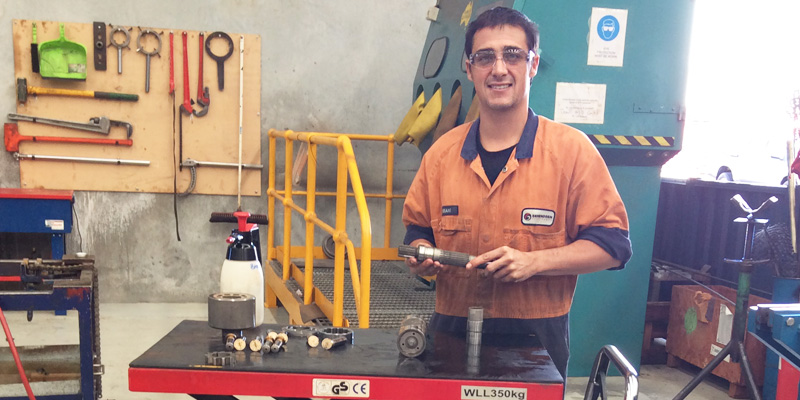 After a positive experience completing his Certificate III in Engineering – Mechanical Trade, MIGAS’ National Apprentice of the Year for 2015, Branten Whittle, hopes to give back to the host company who trained him.

Where did it all start?

Branten started with MIGAS and Berendsen Fluid Power after working as a storeman with Berendsen for a short while. Branten had been looking for an apprenticeship as a young kid, but there weren’t many around and wasn’t able to get a foot in the door. Berendsen recognised Branten had the motivation, work ethic and commitment to complete an apprenticeship, and offered him the mechanical fitting apprenticeship. Branten recognised this as a huge opportunity for him, as someone who didn’t have any direction of what he wanted to do in the long term. Berendsen saw Branten always showing direction in his storeman role, and his interest in learning more and using his initiative, and created the life changing opportunity for him.

Where are they now?

Branten completed his apprenticeship in April 2015, and immediately commenced a full time role with Berendsen. Berendsen specialise in Hydraulics and Hydraulic components, and Branten has shown a keen interest in continuing to learn all there is to know about mechanical fitting and hydraulic systems. Branten would like to specialise in hydraulics in order to become a sought after tradesperson and become better at his job. He hopes to work long term towards becoming a leading hand and ultimately management with Berendsen Fluid Power.

“I am always interested in learning further and doing the right thing by my company by working hard and trying to secure a future here. This opportunity has really inspired me to be the best tradesperson I can be and make the most of the opportunity I have been given.”

Want to inspire your employees?

Branten had no career path and no long term goals before being offered the opportunity with Berendsen as an adult apprentice. He has now developed sought after skills and a real passion for the work that he does. He has a strong sense of loyalty to the company who trained him and saw his potential in the first instance. Branten is motivated to continue learning and be the best he can be, so he can give back to Berendsen for giving him the opportunity.

MIGAS is a well-respected workforce development organisation with the ability to help businesses upskill, re-skill and inspire employees to be the best they can be.