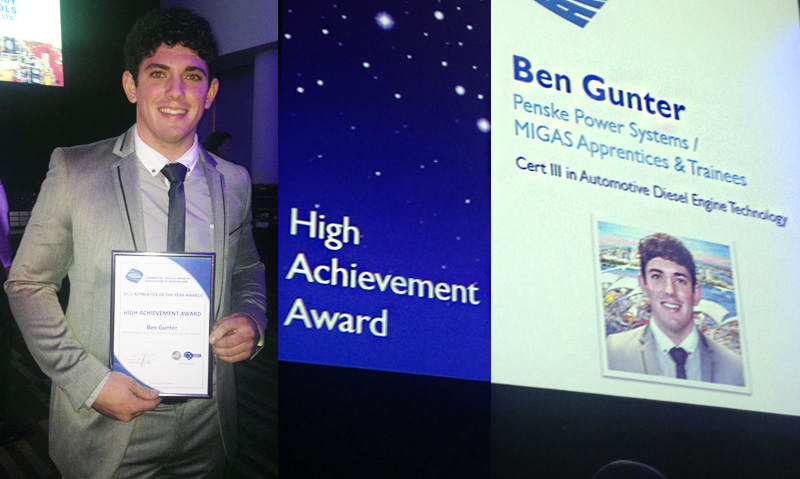 Held on Thursday the 8th October, the CVIAQ Apprentice of the Year Award is designed to recognise apprentice excellence and is open to apprentices in the final stages of their training from the heavy vehicle repair, service and manufacturing sectors. Ben was one of six apprentice nominees from around the state, all working within the heavy vehicle industry. As part of the selection process, CVIAQ looked at the apprentice’s technical skills, leadership skills, commitment to safety and their passion for the industry. Ben’s host company Penske Power Systems in Wacol were pleased to nominate Ben for the award.

Ben has been working on cars since a young age and was originally interested becoming an Aircraft Maintenance Engineer. After doing some research, Ben discovered Diesel Fitting was very similar and had a much higher demand for skilled tradesmen. “I went and saw people in the industry and research it thoroughly…I knew this was what I wanted to do,” he says.

Ben says his apprenticeship has opened his eyes to what he can do with a trade, and provided him with the passion to keep going. He wants to get as many qualifications and licences as possible, so he can be highly desirable to prospective employers. To this end, Ben has gained his Heavy Vehicle Drivers Licence and Forklift Licence out of his own time and pocket. In his pursuit of Field Service experience, Ben also goes out on weekends to work part time with transport companies out in Maryborough. After his apprenticeship, he’d like to gain management experience and continue his studies onto a Cert IV in Engineering.

Ben has also won several Safety Awards with MIGAS throughout his apprenticeship, most recently winning the August Safety Star award for always working to implement improvements to the waste management system at Penske Power Systems. Ben was also a finalist at the 2015 MIGAS QLD Awards Night in held at the Gabba Stadium in July.

Congratulations to Ben for all his hard work and commitment throughout his apprenticeship! Ben is on track to complete his apprenticeship in January 2017 and has a bright future ahead of him as a qualified tradesperson.

Find out more about Diesel Fitting >

Already know what you want? Browse our current vacancies, and kick start your rewarding career today.