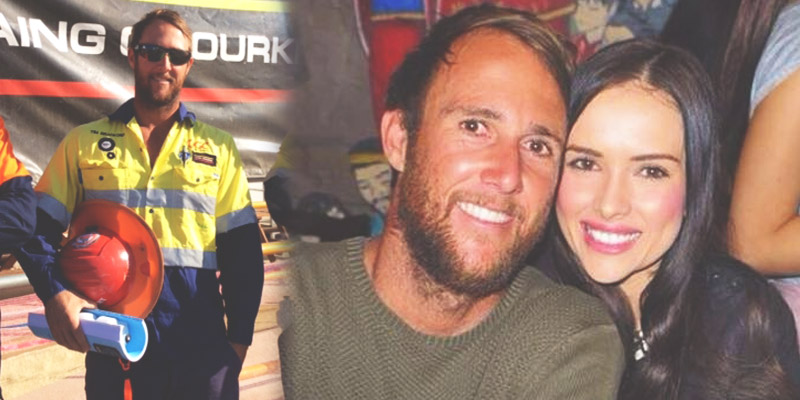 In September 2014, Electrical Apprentice Timothy Bradford had his 30th birthday, along with everything a guy could want: a loving partner of 5 years, good health, and a great job as well as living and surfing on the picturesque Gold Coast.

Sadly, Timothy John Bradford passed away peacefully aged 31 surrounded by family on Thursday the 12th November 2015. Our thoughts are with his partner Kirsty and his family during this difficult time.

"But you know, they pop for us. They're in our dreams, the departed. They're in the things we remember, they're in the archaeology of a grandchild's smile, in the way someone laughs, the things we touch, taste and smell, the songs we hear on the radio, the stories we tell around the dinner table. Time collapses in these moments and, like magic, they're with us again. They're home."

Over Christmas, Tim bought a house with his partner Kirsty, with the contract due to settle in March. In January, he returned to work from an amazing surfing holiday to a harsh blow; due to falling oil prices and contract delays, his host company on the Gas Pipeline were forced to hand him back.

Tim’s employer, MIGAS, promised they would do their best to help him find another placement and to hang in there. Kirsty and Tim set about making plans for their pending house renovation; they couldn't wait to get their hands on it!

In March, they got the keys to their new home and started cleaning and painting. Tim noticed he felt short of breath and complained of feeling tired all the time. Over Easter he visited a Doctor who ordered some tests and drugs, but before long Tim had developed severe pain in his abdomen and was losing weight rapidly.

On April 10th, Tim took his cousin to Stradbroke Island for a surf which was a real struggle; he later found out his lung capacity was at less than 50%. He hasn't been for a surf since then.

A few days later, Tim was sent for an x-ray and a follow up CT scan; showing a number of worrying abnormalities around his lungs. He was sent to a respiratory specialist who ordered a lung biopsy. On Sunday the 19th April, Tim started peeing blood and his stomach was very sore. He was admitted to the Gold Coast University Hospital the next day where he received the grim diagnosis from his lung biopsy. Lung Cancer. Everybody was shocked, including his doctors. They thought the cancer originated in his bowel and was likely to be incurable.

Unfortunately at this time and as a result of the diagnosis, Tim was forced to turn down an apprenticeship placement he was hoping for on the Gold Coast; another in a series of big blows. Tim commenced chemotherapy in May, with many people in Tim’s corner praying it would be effective in arresting the development of the cancer.

Now in September, Tim is in better spirits. His tumours have halved and the blood clots have started to break up. Tim is doing his best to stay positive and appreciates all the encouragement and support he’s received from family and friends. Tim hasn't given up on having it all again, determined to return to work and return to his life with Kirsty in their new house.