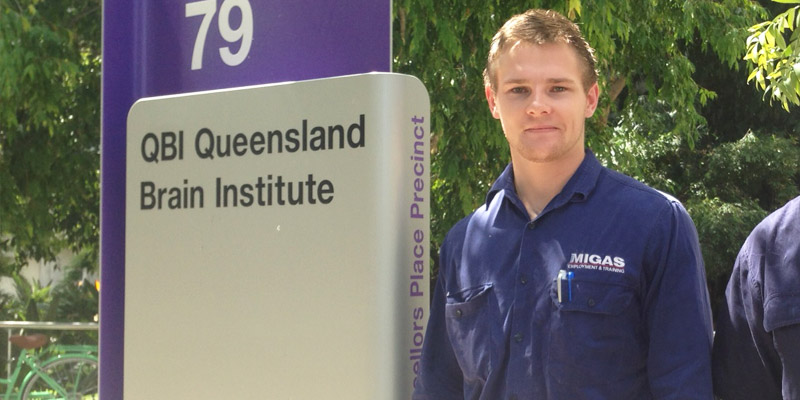 Since starting out as a school-based trainee working towards a Certificate II in Engineering Production, Ethan Park has been hooked.

The QLD Apprentice of the Year for 2015, was offered a full time apprenticeship at the end of Year 11 after becoming interested in all things mechanical. Ethan completed his apprenticeship in November 2014, and now works full time with his host company, the Queensland Brain Institute (QBI) at the University of Queensland.

In working for QBI, quality is a must. Ethan’s customers are scientists, professors and postgraduate students who require custom made equipment to assist with their research, meaning that Ethan must demonstrate a high level of innovation, creativity and precision in his work. Ethan regularly works on projects that require machining to extremely precise tolerances and high quality finishes.

“Ethan has a work ethic that is second to none. During his apprenticeship he has been able to learn at a very fast pace, and as a 4th year apprentice, he was able to take on jobs that I can honestly say would have been a struggle for many tradesmen that I have seen with more than 10 years’ experience.”

Just recently, Ethan was working on ‘whisper rooms’ with the university professors, which involved manufacturing big sound proof boxes. Working with professors on jobs like this one has really helped Ethan to develop strong communication skills, as well as a strong sense of team work. The customers at the university often come down to the workshop with an idea in their head but they aren’t 100% sure how to make it happen. This calls on Ethan to use his existing knowledge of scientific processes, combined with his knowledge and experience in engineering, to take their small idea and turn it into exactly what they are after, and completed to an exceptionally high standard.