A determined 18 year old electrical apprentice has hiked, volunteered and studied his way to a prestigious gold Duke of Edinburgh Award.

Matthew was one of 75 young people in Queensland to achieve gold and was presented with his award at the Brisbane City Hall last month with Minister for Education Kate Jones watching on. The aspiring tradie said he was thrilled to reach such a significant milestone.

“I’m really proud of receiving such an honour from an internationally recognised youth leadership program. It’s a high achievement and I’ve seen it can take you very far in the years to come, particularly on the job front,” Matthew said.

The awards program was founded in the United Kingdon in an attempt to equip young people with the skills and mindset for life and work as an adult. It has since expanded to 144 nations and commenced in Australia in 1959, with thousands of students completing the program across the country every year.

In order to receive the award Matthew was required to perform volunteer work to support the community, learn a new skill, complete a physical task and undertake a team adventure in a new environment. This involved Matthew travelling to Moreton Island to complete a ‘self-sufficient’ 56km walk and camping trip along the beach.

General Manager CEC Alistair Green said he was exceptionally proud of Matthew’s achievement, although it came as no surprise to him.

“Matthew is a humble and extremely impressive young man, and this award is just another example of his ability to start something and see it through to completion. He applies this to everything he does, whether it be packing up a ute for his tradesmen or looking after his equipment,”

“We’re talking about someone who ran his own lawnmower service company at the age of eight and always made time to mow for the elderly and ill. He is a real standout and we need more people like him.”said Alistair. 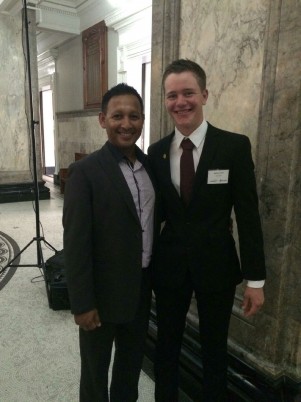 Alistair said he was blown away by the impact Matthew made on the CEC team as early as the first day he showed up for work experience.

“I had multiple electricians come and tell me to offer Matthew a job as soon as they met him, which has never happened before with someone on work experience. He could follow any path he dreams of in our industry,” said Alistair.

For more information about the Duke of Edinburgh award visit www.dukeofed.com.au