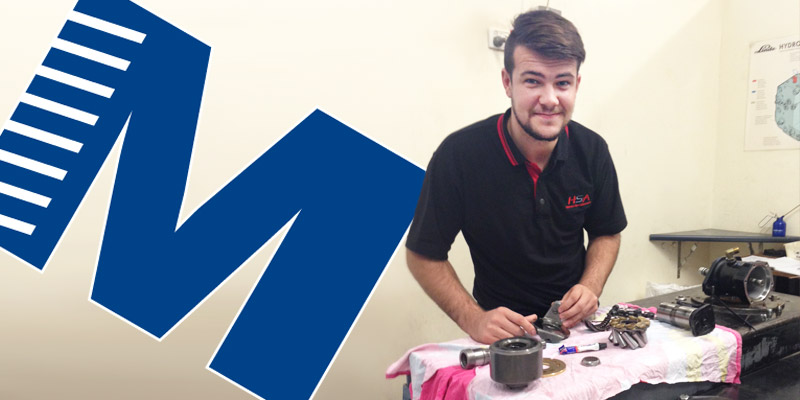 Meet the Australian Apprentice determined to show Gen Y the harder you work, the luckier you get: Brisbane Fitter and Turner, Brad Lilley.

There’s no doubt that committing yourself to a four year learning and development program, like an Australian Apprenticeship, would be an incredible journey of personal growth and life experiences. This is not a career path for the lazy and uninspired. Brisbane Fitter and Turner and 2015 QLD MIGAS Apprentice of the Year nominee, Brad Lilley, comments on how his training changed his motivations both professionally and personally.

Brad’s apprenticeship really improved his confidence and ability to communicate in an effective way.

“At the beginning of my apprenticeship I was rather shy; I have always been the quiet one in my family and I attribute this to being the youngest in the family with a rather boisterous older brother,” Brad says.

Initially Brad found it difficult to open up to his peers and colleagues, but in the last year or so of his apprenticeship he really came out of his shell. Brad attributes this to the training he’d received, which gave him the confidence to believe he could reach out and achieve whatever he puts his mind to.

Brad says one of his favourite parts of the job is the opportunity to work cohesively as a team. Brad puts the disciplines and skills of team work that came from playing football into play at work. This includes keeping his eye on the ball and working hard as a team.

Since completing his apprenticeship, Brad took on a Senior Fitter role with his host company, Hydraulics Specialists Australia. He is now completing a Certificate IV in Engineering while working full time; and is supervising two new apprentices in the workplace.

“I believe it's important to continue training because the industry is always developing and becoming more innovative. This is definitely not a boring industry; which is why I'm continuing my studies – there will always be new challenges.”

Brad enjoys teaching the next group of apprentices because he understands the hard work that lies ahead of them to accomplish their goals and begin their trade career as a qualified Fitter and Turner.

“I am aware that people have different learning styles and don’t always learn things the same way as others do. I have to come up with new solutions to explain things; and that can be a challenge on its own.”

“I've made it through some rough patches in my training and have come out the other side as a more mature and confident person. I didn't always find my apprenticeship an easy ride and I sometimes thought about quitting altogether. Ultimately it was my mentor (at MIGAS) who got me through my training and helped me keep my goals in sight. My bosses have always supported me and encouraged me to continue, because they believed in me. And look where I am now; at the age of 21, I am earning good money, I have a company car and a secure job – this is what an apprenticeship has done for me.”

For any new apprentices entering or attempting to enter the workforce, Brad recommends figuring out exactly what you want to do, setting yourself on a path and identifying your goals.

Brad says to enjoy the time spent as an apprentice and learn everything you can, including picking up extra courses if you can, because “you never know what field work is going to throw at you!”

“In the end, I really enjoy what I do and I'm glad I chose the path that I did. It is a changing industry in a changing economy, with new contracts and new challenges all the time. If everyone works as a team, then the job is completed more efficiently. I've learnt to listen and ask a lot of questions; it’s true that there is no such thing as a dumb question.”

Find out more about Fitting and Turning Apprenticeships >