Long-standing workforce development partners and clients of MIGAS, Action Auto Group, were featured in a local Gympie newspaper recently for their contributions to training in Industry and their commitment to employing Australian Apprentices.

MIGAS are very proud to be in close partnership with Action Auto Group. See the news article below. 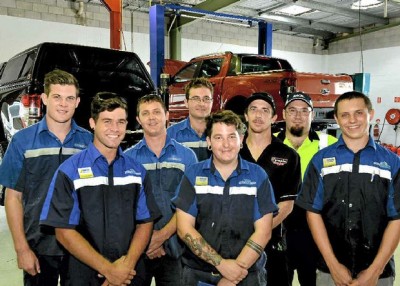 The apprenticeship and trainee provider set a goal with its 100JOBS campaign in late December, setting quotas for different regions.

Hopes were to employ 30 individuals on the Sunshine Coast and Brisbane, 20 each in Sydney and the Hunter Valley and 10 each for Melbourne and Perth by the month's end.

In terms of the Sunshine Coast quota, Action Auto Group's nine new apprentices represents a major chunk of that goal.

Action Auto Group dealer principal Peter Allan said he was proud his newly expanded team had helped MIGAS near its goal for the Sunshine Coast and Brisbane regions.

"We have been putting on school-based apprentices for nearly 12 years," he said.

"I am a big believer in these apprenticeships."

Mr Allan said apprenticeships were an investment in the future and a chance for school-leavers to begin mapping out their future.

Mr Allan said he was excited to be offering dual apprenticeships this year.

"It is a multi-skilled apprenticeship," he said.

"It is a bit like going to university and doing a journalism degree but also an accounting degree at the same time."

"We get a lot of support from them through the interview process, trying to determine who wants an apprenticeship and why," he said.

"It helps us get the right group of people and once a month they are on site doing follow-up interviews and providing support."

Action Auto Group now has more staff on its books than ever before thanks to recent expansions, including Gympie Motorcycles and being RACQ's approved repairer in Hervey Bay.

A MIGAS spokesman said 100JOBS campaign sought to ensure there would be a skilled generation of tradespeople for the years to come.