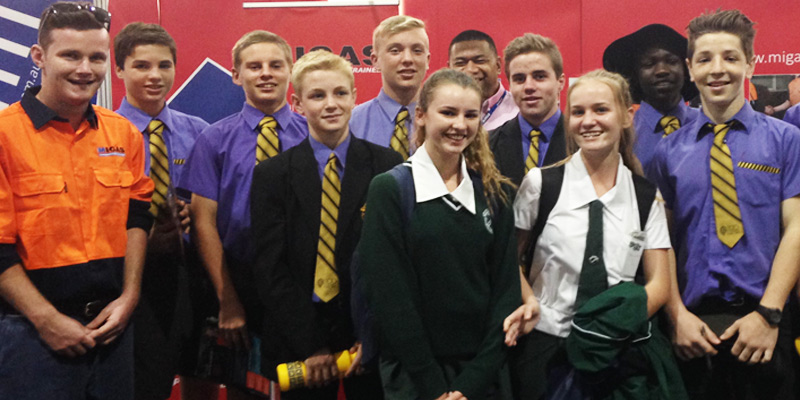 The MIGAS Head Start Apprenticeship Program aims to create alliances with local schools in the Logan area of QLD and promote the benefits of Apprenticeships and Traineeships to students, teachers and parents.

Petelo, Community Liaison Officer, is the driving force behind the Program.

Petelo works with small groups to ensure we are able to provide them with the support and guidance necessary to successfully start and complete an apprenticeship or traineeship. Petelo is passionate about building career pathways for youth and is currently working with a number of students in the Logan region who have identified that they want a trade career.

We recently caught up with Petelo to ask him about some of the great outcomes he has achieved in the short time he has been with MIGAS. Here’s one of his success stories:

“The young person (identifying details withheld for privacy) I will tell you about has had some personal problems and comes from a disjointed family life. He had to move into another area and now lives with his grandparents.

He started at the Eagleby Learning Centre in Year 11 this year. Eagleby is a school for young people who don’t fit into the normal school system and classes are catered around short, sharp days with support structures to retain young people in school. The school suggested if he was serious about gaining an opportunity that he would need to do the hard yards and make the first contact with MIGAS (which he did).

I was able to work with my young person to identify what he enjoyed doing and the level of past experience they possessed, but more importantly why he wanted to start an apprenticeship. He really impressed me with his attitude, and had the full support of his grandparents so I arranged for an interview for a school-based apprenticeship in Salisbury. It can be quite hard to find host employers willing to take on school-based apprentices and Salisbury was over 30kms away from my young person’s home in Mount Warren Park. My young person definitely proved he was committed, turning up to his interview on time despite the late withdrawal of his Grandfather who had planned to drive them!

He was successful in gaining the role and you couldn’t wipe the smile of his face (or his Nanna's) when he was officially inducted to MIGAS!

He started work a couple of weeks ago and his father was so thankful for MIGAS in helping to achieve one of his goals and was really looking forward to him completing Year 12 with the school. The family are also excited about the prospect of future career opportunities once he finishes his school-based apprenticeship.

It is just really heart-warming to know that we have helped to set someone on their pathway to a fantastic career.”

If you would like to give a local student a Head Start in their career and can provide the opportunity for them to acquire practical work skills, contact MIGAS.  School-based apprentices and trainees work one day a week while they complete their schooling. This is a great way to transition a full time apprentice or trainee into your workforce following completion of school and can help boost productivity in your workplace.

Enquire about a School-based Apprentice or Trainee with MIGAS now >