Patrick's nomination of Shane Ryan went something like this: 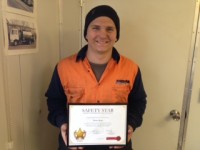 "I would like to nominate Shane Ryan for a safety award.

Since becoming OH&S Officer, I have been working with Shane’s help to make the workshop safer for everyone. Elevated Work Platforms had been a serious issue in the workshop with near misses happening quite often. I asked Shane to help me make some stronger, safer platforms. The very next day, Shane came to tell me that he had completed the platforms and that they could hold a ton of weight.

He has also fixed doors that we had had issues with, and has mentioned to people that they should be using their PPE.

He was the first to bring to my attention that one of our workers (who happened to be my father) had hurt himself and was stuck under a truck, while others in the area did nothing.

I can’t recall a time I have seen Shane use the wrong PPE, or not use it at all.

Shane has stood out as a great apprentice with a strong appreciation for his own safety and the safety of the people around him. He often goes above and beyond the expectations of a young apprentice. Thank you."

Want to be a Boilermaking Apprentice like Shane? Check out current Apprenticeships available now.