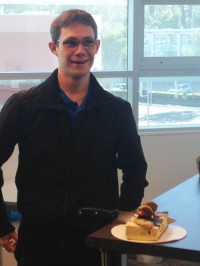 Matt is a dancer with Bust a Move Dance (BAMD). The large dance crew of nearly 60 people, including parents and supporters, have been given the opportunity to travel to the World Special Olympics where the dancers will perform daily at the local sports venues.

Leaving on the 22nd July, BAMD will travel around and rehearse before performing at the Special Olympics in front of visitors and athletes from around the world. BAMD were able to crowdfund an overwhelming $42,000 to realise the dream of taking the crew to the United States. BAMD see this is as their biggest achievement to date, and will be a once in a lifetime opportunity for their students.

But it won’t be all hard work! The group plans on doing some sightseeing while they’re away as well. Matt is looking forward to visiting Universal Studios, Disneyland and Hollywood. Matt’s been to these places before, and he really enjoyed them the first time, so he’s looking forward to seeing them again.

Matt became involved in BAMD when his friend from his swimming classes told him about it. This is when he started and he loved it straight away. He says the teachers are very friendly and there are some crazy dance moves. His favourite part though, is that he has made plenty of very good friends. Matt enjoys dancing a lot, with his favourite type of music being hip hop. He enjoys turning the stereo on and having a dance in his bedroom.

Matt has worked in the MIGAS Brisbane office for the last few months helping out the Administration Team with a variety of tasks.

Bust a Move Dance is the leading dance school for people with disabilities in Brisbane, working with students of all ages and abilities.